Trust is the bandwidth of communication.
– Karl Erik Sveiby

Change, restructuring, and “re-org” are common buzz words these days.  The rapid rate of change in organizations requires a nimbleness to regroup into a variety of teams and work groups that often transcend established reporting structures.  This demands of team members an ability to become high performing in ever shortening cycles of work and productivity.

In a recent workshop with the senior management team of a mid size, 25 year old nonprofit organization in the Puget Sound, I introduced the Team Performance Model (Drexel & Sibbet) to this newly configured team of leaders.  They had just come off of an intense strategic planning phase and had had to jump into being a high performing team in a matter of days.  In this two hour team building workshop, this group was able to take a deep breath and assess where they were as a team. 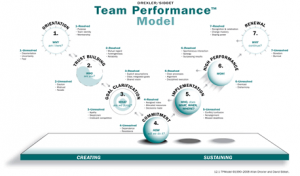 Using the visual model and framework for team building from the Team Performance Model (see image), the group made several important discoveries.  What they discovered about themselves as a team was that they, like so many teams, had jumped right into implementation of projects and plans because the environment demanded this of them.  They realized that they had more foundational work to do in articulating their purpose as a team beyond attending to the fire drill du jour.  Although they affirmed a core level of trust already present within the group, they realized that in the fast paced days ahead, this trust could wear thin without some intentional trust building along the way.  They agreed that trust building isn’t something that we do once so we can check the box and move on!

So how do we intentionally build trust in a team?  With much of our time spent in meetings rather than in ropes courses or trust fall exercises, how do we weave trust building on a regular basis? Here are a few of the ideas that came forward in my work with this group:

–at the end of a meeting, “check-out”—each person has a chance to say where they are with the content of the meeting.  Raise the level of trust by raising the level of forthrightness in the group.

Essential to trust building is taking the time to connect with each other.  Our mile long to do lists seduce us into jumping to task.  Yet the whole of our human experience responds better when we connect first.  We know this from our interactions with animals and children; adults have often developed a habit of overriding the need to connect first before jumping into action.

As a leadership coach, my work with this group confirmed that the Team Performance Model supports the work of a group in making key discoveries that help move their work forward because of strengthened connection and trust.

Search this site for…